When my first baby was born via emergency c-section, I was devastated. I felt like less of a mom and less of a woman. The “natural birth” folks had..

When my first baby was born via emergency c-section, I was devastated. I felt like less of a mom and less of a woman. The “natural birth” folks had really gotten into my head while I was pregnant, and—despite the fact that the surgery unequivocally saved both of our lives—I felt like I should have somehow been able to avoid it. When my second child was born via planned c-section, I had a totally different experience. His birth day was the absolute most joyful day of my life. That second c-section completely changed my ideas about birth. I felt like every bit of the badass woman and mother that I am.

My third c-section was a dream. Sure, it was major surgery, but I got to plan every bit of it. I popped in with a full face of makeup, hair curled, after a full night’s sleep. My baby was full-on, butt down, head up breech as breech can be, but it didn’t matter one bit because she wasn’t coming out the usual exit. A few hours after I arrived at the hospital, I was sitting in my room with my two sons, my tiny, tiny beautiful pixie of a daughter, and my husband just beaming over the family I had created. C-section births brought my three perfect babies to me, and I couldn’t be more thankful.

And if you consider the history of the c-section, I realize that I also couldn’t be more fucking lucky, to be honest.

The C in c-section stands for “cesarean” because of a highly unlikely, almost certainly false old tale about Julius Caesar being born via surgical birth. There’s pretty much almost zero chance the yarn holds any truth. At that time in history, if they’d sliced his mother open to retrieve the tiny future ruler, she’d have been toast for sure. History tells us that she had more kids after him (which means Mama Aurelia was still alive, obvs) and so… that myth is probably busted.

The origins of the procedure are a little hard to pin down, but we do know that c-sections have been around for a long time. Some ancient cultures left behind art and stories that allude to cutting living babies out of their (usually dead or dying) mothers. The thing is, for a long ass time, the whole c-section thing was not really designed to preserve two lives. It was just a way to harvest a baby when it became pretty clear that the birthing person was quite certainly not surviving the ordeal.

In the 1700s, doctors started thinking about ways to retrieve stuck infants without always offing the moms, but it didn’t really pan out right away.

I read a history of the c-section that said according to some records, not one single mother survived a c-section in Paris between 1787 and 1876, which is, ya know. Yikes. (Could be because they didn’t stitch up the uterus back then, and thought it would spontaneously close itself. I cannot function when I think about that fact too long, so…moving on.

In the late 1800s and early 1900s, things started to take a hopeful turn. Doctors finally started closing up the uterus before closing up the abdomen. They realized that not waiting until the person was on death’s door from a horrifying labor complication was a helpful technique. (This seems fairly obvious to me, but what do I know?) They did a thing called “vaginal c-section” which you will need to research for yourself because I literally cannot. I am gagging at the thought, and I don’t even know what it is.

Anyway, luckily for all of us, some surgeons eventually experimented with the low transverse incision that is still most common today, and antibiotics became a thing: two kind of huge bits of progress.

Today, the survival rate for a c-section in the United States is only slightly lower than a vaginal delivery, which is saying something since so many of them are performed emergently. C-sections are riskier in developing nations, which should shock nobody, but appall everybody. As a species, we really need to work on making safe healthcare available globally, but that’s a whole ‘nother article.

Although I’ve had three c-sections, I know that in uncomplicated situations, attempting a vaginal delivery is probably the safer option for most people. I’m grateful for my c-sections, but I’m not saying we should all run out and get a little slicey dicey baby removal procedure for funsies.

We are just so damn lucky that c-sections exist. C-sections are a godsend to people like me when nature just doesn’t do its thing and the baby just is not going to come out. Instead of losing the baby or the parent to a complication, doctors can try to save them both now–and know that the likeliest outcome is survival. That’s amazing. The absolute miracle of medicine. 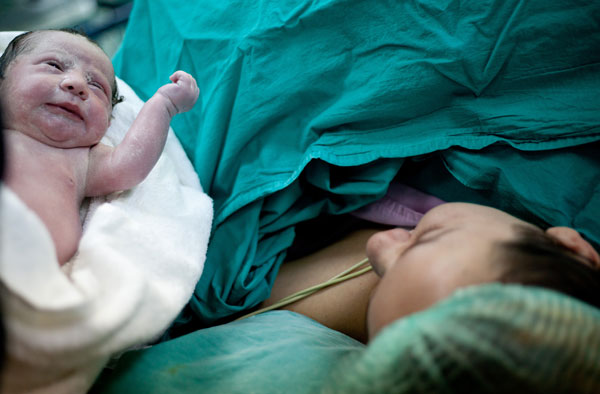 But c-sections also important because they provide options for people who need them for other reasons.

While I was planning this article, a beautiful young woman reached out to let me know that during labor with her first child, she unexpectedly suffered a massive panic attack. The experience dredged up memories of traumatic abuse, and her intense reaction took her completely by surprise. She felt completely unsafe and terrified the entire time. It took her seven years to feel ready for her second child, and only when her OB agreed that a planned c-section was the best option for her.

My friend Blake chose a planned c-section because she works in the neonatal ICU, and she has seen babies devastated by the outcomes of vaginal births that don’t go to plan. She lives with an anxiety disorder, and the what-ifs of a vaginal labor terrified her. Because of her personal history, her OB agreed to schedule her c-section. She had her son without laboring, and she has never regretted her decision.

An acquaintance of mine is non-binary. They carried their child for practical reasons, but the idea of giving birth caused intense dysphoria that became debilitating to them. Scheduling a c-section allowed my friend to experience parenthood without the mental anguish of a traumatic delivery.

C-sections have a gruesome history, but the modern version is the reason that many of us are alive and well today. When vaginal birth goes sideways or isn’t the best choice for a patient, our old friend Cesarean can swoop in to save the day, and that’s pretty freaking cool.

The post The History Of The C-Section, And Why We’re F*cking Lucky To Have This Option appeared first on Scary Mommy.