Creola was a strong independent Black woman who was a single mother of four children in the 1970s. When she was diagnosed with dementia 40 years..

Creola was a strong independent Black woman who was a single mother of four children in the 1970s. When she was diagnosed with dementia 40 years later, her children couldn’t believe it. Jeffrey, one of Creola’s sons, retired from his job to care for his mother. Jeffrey shares how important it was for them to find the right doctor for his mother. He also credits the Alzheimer’s Association® African American-Black caregiver support group for providing him with a community of people he can go to for advice and support. 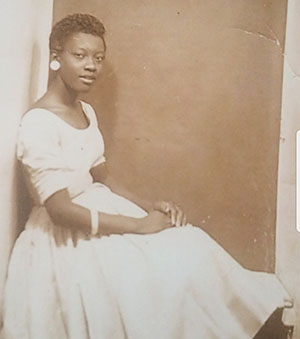 Single mother of four
Creola was born in a small town in Louisiana as the youngest of 12 siblings. After her husband died, Creola moved with her two boys to Oakland, CA. It was difficult for an Black woman in the 1970s to find a job. Luckily, the owner of Brekkes Cafeteria knew Creola would be a great employee and hired her as a waitress.

While living in Oakland, Creola had two more children, her son Jeffrey and daughter Debra. To make ends meet, Creola worked two more jobs to provide for her family. Eventually, she was able to save up enough money to buy her own house.

“She worked two to three jobs to draw income,” said Jeffrey, Creola’s son. “We didn’t go without anything. We had breakfast, lunch and dinner. We didn’t know our economical struggles because she didn’t let us see that.

“Even around the holidays she made them so joyful. We had so much time having fun, we weren’t worried about the quantity of stuff we got. She showed us how important that was.”

Creola eventually found a full-time job working for Western Electrical Company, where they made telephones. She met and married a man who lovingly took over the role of father for her children. The two of them decided to open their home to foster children in emergency situations who needed immediate placement. One of these children stayed with them from the age of three until they were 16.

Eventually Creola and her husband decided to move back to Creola’s hometown in Louisiana, where she stayed even after her husband’s passing in 2010. Despite having a large number of family living there, “enough to fill a church from top to bottom,” said Jeffrey, Creola wanted to do more. She decided to get involved with her church and other social committees and even became president of some of them. 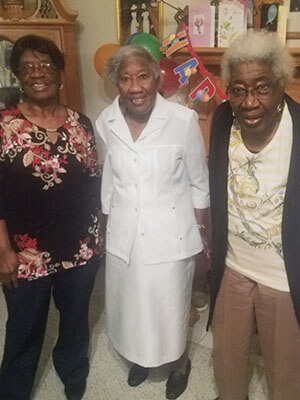 Creola (left) with her older sisters

A phone call from the doctor
As an independent woman, Jeffrey and his siblings assumed their 70-year-old mother was doing fine living alone after the death of her second husband. Most of Creola’s siblings were living past 100 and were still able to cook, clean and drive.

“Mom has a sweet disposition and doesn’t let you know when she’s not feeling well,” said Jeffrey. “She was living alone and functioning well, or so we thought. Debra would visit her on Mother’s Day and Christmas and nothing seemed wrong.”

Jeffrey started getting phone calls from other family members who lived locally saying that Creola was repeating herself. She would forget to turn off the water and couldn’t remember if she’d eaten.

“It’s a small community,” said Jeffrey. “Everyone knows everyone. The doctor called me and said, ‘We haven’t seen your mom, she’s missed the last three or four appointments.’ I knew then we needed to go there and get her connected to a neurologist.”

Issues with the neurologist
In 2015 Creola’s primary doctor referred her to a neurologist where she was diagnosed with mild cognitive impairment (MCI). MCI is an early stage of memory loss or other cognitive ability loss (such as language or visual/spatial perception) in individuals who maintain the ability to independently perform most activities of daily living.

“I think because mom was so self-sufficient and so wonderful at her own self-care, we couldn’t relate to her diagnosis at first,” said Jeffrey. “We weren’t seeing what we were told we’d be seeing in terms of her memory loss.”

Jeffrey and Debra both noticed that their mother didn’t want to go to the appointments with the neurologist. Creola would put up a fight and insist she didn’t like her doctor. Confused, Jeffrey decided to go to an appointment with his mom and see what the problem was.

“At the appointment with the neurologist, the doctor never addressed my mom directly,” said Jeffrey. “All of the questions were posed to me.

“My mom kept asking why the doctor wouldn’t talk to her. The doctor was standoffish with my mom. I knew at that point we needed a neurologist that looked like my mom.” 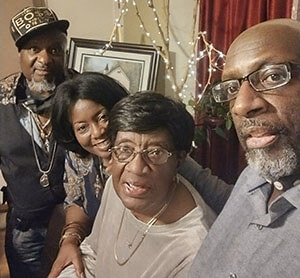 Creola (second from right) and her children

Eighty-nine percent of Black Americans say it’s important for Alzheimer’s and other dementia care providers to understand their ethnic or racial background and experiences. However, less than half of Black Americans feel confident there is access to providers who are culturally competent.

Luckily for Jeffrey, he was able to find a Black neurologist to provide his mother with a second opinion. “It wasn’t because we were in denial that she had some issues,” said Jeffrey. “We wanted to be clear about it.”

Creola’s new neurologist gave Creola the respect and attention she needed to feel comfortable with her as her doctor. This neurologist told them that Creola has dementia and informed Jeffrey and Debra that Creola could no longer live alone.

Surviving COVID-19
Despite having a large family close by, the family decided that Creola should live with Jeffrey. Jeffrey, wanting his mother to be comfortable, decided that the best thing to do was to split their time between Louisiana and Oakland. Every six months or so the two of them would move back and forth between their two homes.

However, this came to an abrupt halt in early 2020 due to the pandemic. This forced Jeffery and Creola to remain in Oakland. Then Creola, Jeffrey and Debra all caught COVID-19. “We are all survivors of COVID-19,” said Jeffrey. “I was asymptomatic, but my mom was not. Mom has underlying health issues, and it was a battle.”

Finding a support group
Through a family friend, Jeffrey was introduced to the Alzheimer’s Association support groups. Specifically, the Lunch and Learn support group, which is a group specially designed for the Black community.

“I wanted to position myself the best way possible to provide care for Mom,” said Jeffrey. “I’ve been going to the support group for three years. I’ve taken classes and I’ve educated myself on what to expect.

“To be in an environment of people of color who are dealing with the same thing you’re dealing with, the support is phenomenal. We feel like we’re all alone in this situation and we get so overwhelmed with the various changes. [In the support group] there are others there who can give you tips on how to deal with a particular characteristic of what’s happening at home.” 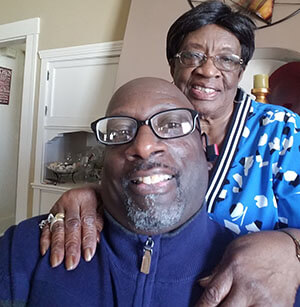 Outgrowing stigma
For some people in the Black community a dementia diagnosis is seen as embarrassing or something to keep private. They worry it may affect their social or professional standing and don’t want to be connected to it.

This stigma was true for Debra and Creola. “Debra was worried it would embarrass Mom to announce that she has dementia,” said Jeffrey.

“Mom was reluctant and was concerned about how she would be viewed by strangers. Now [that the disease has progressed], Mom doesn’t care about that anymore.”

Reach out for support
Jeffrey wants to remind Black caregivers that they need to look beyond the stigma of dementia to get the care they need for their loved ones. “It’s important to shake off the embarrassment issue,” said Jeffrey.

“[Dementia] is not an embarrassment, it’s not pride, it’s not keeping family secrets. It’s those secrets that will cause you the most harm.”

Instead, Jeffrey encourages new caregivers to reach out for support and to educate themselves about the disease. “[Support groups will help you] understand the symptoms and determine what the triggers are,” said Jeffrey. “You’re not dealing with the same individual you once knew. Times have changed for you and you have to change accordingly.

“Make sure you arm yourself appropriately to the process and the diagnoses. Nothing is worse than feeling all alone. Join a group that is already set up to give you that guidance that you will need.”

Join the Lunch and Learn support group or any other support group offered by the Alzheimer’s Association by calling the 24/7 Helpline at 800.272.3900.