The wife of Coach TaEUR(tm), supports a pillar in the Monterey community

Michi Wrightâ€s husband Tyrone Sr. is well-loved and respected in his community. His work with children and teens made him a valuable resource for..

s husband Tyrone Sr. is well-loved and respected in his community. His work with children and teens made him a valuable resource for parents to turn to when they needed help. Now living with Alzheimerâ€

s, Tyrone is no longer able to support those families. Michi, however, has stepped up to care for Tyrone and is honored to do so. Michi shares Tyroneâ€ 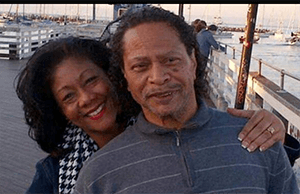 Counting on Coach T
Tyrone Wright Sr., or â€œCoach Tâ€ as he is known, was a community leader in Monterey County. He and his wife Michi have a total of seven children between them. They also have 18 grandchildren and 17 great grandchildren.

Tyrone worked for Pacific Gas and Electric (PG&E) for 46 years. In his free time, he volunteered to put together the after school and summer sports programs for the Boys and Girls Club of Monterey County. He also helped support Special Kids Crusade, helping children living with special needs play sports.

â€œHe brought out a different light in those children,â€ said Michi. â€œHe made sure everyone could do something while they were on the court. He never brought attention to their disabilities but made it possible for every child to participate.â€

Coach T also coached basketball at Seaside High School, Carmel High School and Marina High School. During the off season he worked with travel teams such as Seaside Police Athletics League and Seaside Select. He also organized his own travel team called “Wright Stars” for those kids who could not afford the fees to play on the other teams. Wright Stars qualified for Nationals which was a big accomplishment for the players. 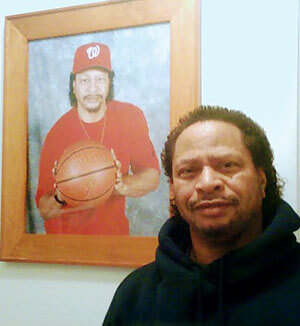 â€œTyrone would also provide those in need with college tuition, book bags, school supplies, even tennis shoes if that’s what they neededâ€ said Michi. â€œThe community knew they could count on him physically, emotionally, spiritually, or whatever the case may be.â€

Additionally, Coach T often found himself fulfilling the role of a life coach. â€œParents would put their teen in front of Coach T and say, â€˜you listen to him, heâ€

s got something to teach you,â€

â€ said Michi. â€œCoach T would come at the situation from a different angle than the parents and often times get a better response out of the teen. They all loved and respected Coach T and still do to this day.â€

s diagnosis
In 2012 Michi began to notice that Tyrone wasnâ€

t acting like himself. She suggested he see a doctor, but Tyrone refused to acknowledge that anything was wrong. It took Michi a year, but she finally got him to see someone. â€œI told Tyrone the doctor had called, and it was time for his annual exam,â€ said Michi. â€œI had to call his doctor and ask him to squeeze Tyrone in and have a neurologist come and do a test.â€

In November of 2013, Tyrone received the results and was diagnosed with Alzheimerâ€

s disease. The first thing he did was have a meeting with his children to share these results. â€œA lot of people donâ€

re oblivious to it. Even I had to buy books and read up on it so I could know and understand how to care for Tyrone.â€

Retirement
With his newfound diagnosis, Tyrone decided it was time to make some changes. His first major change was retirement. He retired from PG&E. Tyrone spent his days working around the house and he loved going to the store just so he could find a little old lady whose groceries he could pay for. He couldn’t wait for me to get home to tell me about the smiles he made happen. “He smiled so hard just telling me about it,â€ said Michi. â€œHe made their day. Tyrone had a heart for the young and old.â€

He continued doing this until he gave up driving. Michi said, â€œHe willfully put away his car keys because he didnâ€

s diagnosis she began searching the internet for resources. She found the Alzheimerâ€

s Association and has been using their services ever since.

s Association has many resources for both caregivers and people living with the disease. Here are just a few ways the Alzheimerâ€

s and participated in her first one in 2014. â€œAt our first Walk we met a lot of nice people,â€ said Michi. â€œThey remember us from year to year. They call and check up on us.â€

What meant the most to Michi was the opening ceremony. She loves being surrounded by all the people standing together watching the stage program. Michi also enjoys the music and of course the stories shared on stage.

s â€” their reasons to end the disease.

â€œThe first time he was on stage, he walked up and thanked everyone for being there to support him and others like him,â€ said Michi. â€œHe confessed to not knowing all there is to know, but that he could count of his wife for support. He ended by saying ‘now we were going to walk these thousand miles.â€

Tyrone laughed and said, ‘Ok just two miles.’ He was such a funny guy and an all-around motivator.â€

Tyrone was asked to hold the blue flower two more times. By the third time, he was unable to communicate clearly, and he needed help getting onto the stage. While he did not speak that year, he stood with the other Promise Flower holders and held his blue flower.

Tyrone on his birthday

Sudden illness
In 2018 Tyrone showed signs of illness and was taken to the hospital for a high fever, a stomach virus, blood clots, and a bleeding ulcer. He spent 10 weeks in the hospital and Michi never left his side. After the 10 weeks, Tyrone was able to return home just before his 70th birthday.

Prior to his hospitalization, Michi had planned a big 70th birthday celebration and fortunately he was released from the hospital in time to attend. â€œTyrone was not completely himself at the party and rightly so since he had been through a major ordeal,” said Michi. â€œWe had over 100 RSVPs for the party, and we celebrated him to the fullest. There were a lot of tears and smiles – a birthday celebration no one will forget.â€

Tyrone ended up back in the hospital two months later as he was having difficulty swallowing and had a fever. Doctors determined that he had scar tissue on his esophagus, and it had become permanently narrowed. He would no longer be able to eat solid food and foods would now need to be pureed. He later had a feeding tube inserted and no longer takes anything by mouth.

Tyrone was able to return home and Michi, who continues to work, knew she would need assistance. â€œI asked a member from our church if she would be our caregiver,â€ said Michi. â€œPhyllis does a dynamic job. She has been the best support to me and an awesome caregiver to Tyrone. It will soon be four years. We are a family. 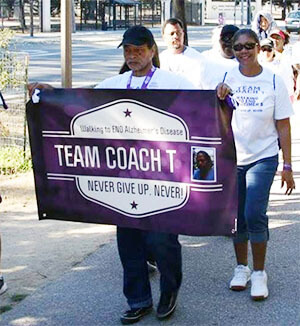 Team Coach T at the Monterey Walk to End Alzheimer’s

Fortunate to care for her husband
When it comes to caring for Tyrone, Michi considers herself to be very fortunate. â€œThis life comes with struggles, but I never complain about it,â€ said Michi.Â â€œIâ€

m the one who gets to take care of this special man. This is the least I can do. Heâ€

s not them, it’s not their fault. Theyâ€

re still your loved one. Love, patience and compassion is key.

“Caregivers need to accept help when offered. This was very difficult for me at first but now I accept help from family,Â  friends and especially our church family. It make our life’s challenges just that much lighter.” 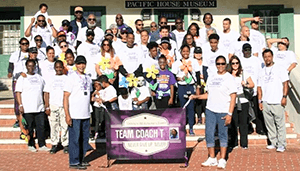 s is used to advance care, and support in local communities and fund research worldwide. â€œYou never know when this is going to happen to someone you love,â€ said Michi. â€œIf youâ€

re not experiencing it now, do a good deed and pay it forward. You never know when youâ€

re going to need the type of services the Alzheimerâ€

â€œWe need a cure, we need that white flower [representing the first survivor of Alzheimerâ€

s disease] and we need the support of people, volunteers and funds. Educate yourself about the disease and youâ€

ll see why your support is much needed.â€

You can join Tyrone Wrightâ€

s team, Team Coach T or form your own team and join us for the Monterey Walk to End Alzheimerâ€

s on October 9. Not near Monterey? Register today at alz.org/walk to find out more about being a part of Walk in your community.