Americans are obnoxious. As an American who doesn’t claim the majority of the U.S. population, obnoxious might be putting it–in a politically correct ..

Americans are obnoxious. As an American who doesn’t claim the majority of the U.S. population, obnoxious might be putting it–in a politically correct way. Because when I say obnoxious, what I really mean is the rest of the world finds us hella entitled, foolish, and downright too much. Never has there been such a perfectly illustrated example of this than all that is Ted Lasso.

Stumbling across Ted Lasso on Apple TV+ was definitely a stumble. Your girl is a Dateline devotee. I’ll also indulge with anything that flirts with Historical fiction on film. But this stumble into the world of Ted Lasso is one I don’t regret. Not for a moment. No, I’m not a football fan. And yes, the football Ted Lasso is all about is soccer. Not the sport of intentionally ramming one’s head into the opposing rivals (I’m sorry American football fans, but it’ll never make sense to me).

Who Is Ted Lasso?

Ted Lasso (Jason Sudeikis) is an annoyingly optimistic American football coach who finds himself coaching soccer in the U.K. This is the spoiler alert warning. I’ll do my best to not spoil much but can’t make any promises. Y’all have had a year to catch up on season 1–get it together, people. No one gets more annoyed with our American-y behavior than the British, so that in itself is pretty freaking hilarious. The team kind of hates him, the fans love to hate him, and the current owner (ex-wife of the previous owner) loves all the hate going around.

Even so, Lasso’s relenting optimism and upbeat attitude gives us all a dose of much-needed laughter. You know, the kind of hardcore giggle that abs are made of. He’s a football coach who knows zip, zilch, nada about soccer and has been brought on board to coach a floundering premier soccer league. But damnit, he won’t let that hold the team back.

Several subplots surrounding the team hold a little something for everyone. Two all-star athletes on the same team, butting heads over the way things should be done. A love triangle between said players and a mutual love interest. Of, and of course, unending hilarious one-liners from Lasso and his partner in crime, Coach Beard (Brendan Hunt). As a coffee lover, who doesn’t understand the English’s endearment to tea, one of my absolute favorite lines is, “I always thought that tea was just gonna taste like hot brown water. And you know what? I was right. It’s horrible. No, thank you.”

Come For The Humor, Stay For All The Feels 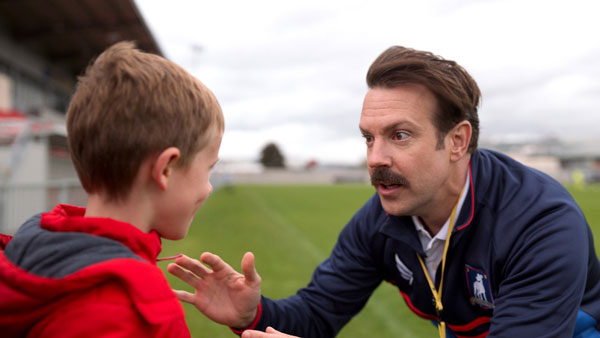 Lasso might be one cool cat who lets his team’s subtle mockery roll off his back (or maybe, he just doesn’t get it) but there’s more to the man than just jokes and giggles. Mid-season we find out that under his happy-go-lucky exterior, Ted is dealing with his own personal hell.

With his marriage crumbling and his inability to stop it, we get to see another side of his character. I can’t even tell you how thrilled I was to see representation of a panic attack in this series. I mean, Ted, I know it sucks buddy, but thanks for taking one for the team and representing what smiling depression can look like. It’s something we’ve hear about, and maybe some of us have even experienced. While Lasso is an extreme example, any representation is deeply appreciated.

Aside from all that, watching a team really come together even though there are plenty of reasons to let it all fall apart is a much needed boost in this day and age. Seriously, we’ve got impromptu roasts by the team’s water boy turned co-coach, a heart-to-heart, get-it-girl pep talk in the bathroom, and laughs for days. Not to mention that everything sounds better when you hear it in a British accent—it just does.

Season 1 didn’t leave off on a cliffhanger, but it certainly left many loose strings undone. With season 2 out and a season 3 already confirmed, I definitely recommend indulging in in this sarcastic, hilarious, refreshing brand of humor.

Never mind all the awards Ted Lasso has been nominated for (and won). Because who can forget Sudeikis’s Golden Globe acceptance speech this year? His tie dye hoodie vibes are something we can all related to after this past year. Honestly, probably what I’ve been wearing 98% of the time I binged Ted Lasso.

So, what are you waiting for? Stop doomscrolling and take a break from the awful reality that is the news cycle. Don’t worry, you’ve only missed the first two episodes this season, with the third episode scheduled to come out this Friday.

I know, I know, soccer might not be everyone’s cup of tea (see what I did there?), but don’t make the mistake of sleeping on Ted Lasso. A show that is fucking hilarious with a whole lot of heart. It’s something that we all could use a little bit more of right now.

The post Don’t Sleep On ‘Ted Lasso’ Or You’ll Be Missing Out Big Time appeared first on Scary Mommy.